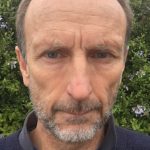 Adrian Harris is an expert in fraud management. He currently works for Xintec, and has a long track record with other specialist firms.

Adrian has also served as a member of the RAG Steering Committee.

Adrian spent his early career manufacturing plastic seagulls and aluminium windows, but moved into telecommunications when he took up a development position in the US with AT&T Bell Labs way back in 1985.

In 2002, Adrian returned to the UK to take up a position with Cerebrus Solutions, a fraud management software vendor that was later acquired by Neural Technologies. Adrian’s time in risk management has been spent mostly in pre-sales, but occasionally he likes to dabble in deployments and development.

Adrian has witnessed many changes in telecommunications over the years, from two tin cans and a piece of string to 5G. That said, he is frequently amazed at how the foundations he gained more than 30 years ago apply equally today. Even fraud shares common fingerprints over the years. The main difference is the level of anonymity: back in the early days, unless you had a really long piece of string, you could see the fraudster.