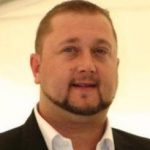 Chad Thomas is an award-winning radio presenter at ChaiFM, a provider of expert commentary on organised crime for television news, and CEO of his own forensic investigation business.

During his career, Chad has been a Specialised Criminal Investigator in the South African Corps of Military Police, a portfolio security manager for a property fund management business, and Head of Investigations for a bank. He won the Security Officers’ Board Gold Medal of Bravery in 1998, was nominated for the Mail & Guardian Drivers of Change Award in 2008, and his show Corruption Busters won the 2017 Best Daytime Radio Show in the Liberty Radio Awards.