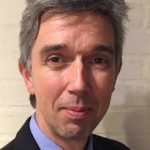 George has a DPhil in neural computing and a bachelor’s in computer science. His education in general sciences, practical and theoretical computing, artificial intelligence and neural computing, has led George to develop a wide range of skills, leading to the receipt of many awards in recognition of his abilities.

During his first degree at Brunel University, George developed many software applications for various companies such as Esso, IBM and CERN, covering areas from hardware systems to high-level user interfaces. The University of York presented him with his doctorate following his extensive research into fault tolerance for neural computing.

As an inventor, George’s name is linked with dozens of patents relating to fraud detection and data analysis.

George joined Neural Technologies in 1994. He is widely recognised as an expert in the field of fraud analysis with the application of advanced analysis techniques.