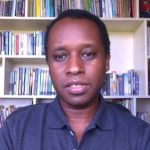 Joseph Nderitu is a Kenyan revenue assurance, fraud and audit professional who has worked for several telcos across Sub-Saharan Africa. He is also a member of RAG’s Steering Committee, having been appointed in November 2019.

During his career Joseph has been both a consultant and a manager inside telcos. He was the Head of RAFM at Vodacom Tanzania and he has also worked in assurance role for Safaricom, Bharti Airtel, and Vodacom Mozambique.

Joseph is also widely-known for the insightful and amusing articles he writes for Commsrisk.

When not providing specialist RA advice, flying airplanes, writing articles, being a community leader or tending to his farm, Joseph somehow finds time to assist the Risk & Assurance Group by identifying top-quality speakers from the African continent.