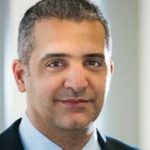 Mohamed Dabbour is the Executive Vice President and Head of Africa for Millicom, the international group of telcos. He will be a speaker at RAG London 2018.

Prior to joining Millicom, Mohamed worked for BESIX, the largest Belgian construction company. He started his career at PricewaterhouseCoopers in Brussels as Senior Accountant.

The presentation that Mohamed will give at RAG London is to be on the topic of how to manage risks in emerging markets.