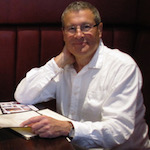 Tony Kremer (pictured) is a retired management consultant who was one of the founders of RAG. Towards the start of the century, Tony and several other London-based employees of Cartesian identified a need for a recurring meeting of telcos that were experimenting with the nascent art of revenue assurance. Since then RAG has grown to become a global association that brings together professionals from every continent, but few of its current members know the story of RAG’s beginnings. Tony kindly took time away from his many passions, which include community activism, football, and the stories of H.G. Wells, to give this interview to Eric Priezkalns, the current Chief Executive of RAG.

Eric: I’m really glad to have this opportunity to ask you about the early days of RAG. To understand where we are going it helps to know where we have come from, but nobody has documented the origins of RAG. You were involved in RAG from the very beginning. Can you tell us the story of who came up with the idea of a friendly get-together for revenue assurance practitioners, and why they went to the trouble to arrange it?

Tony: Back in 2003 I had a lead role in both revenue assurance and marketing, so perhaps it was not surprising that I should come up with the idea and put it to Alan Strong, the Managing Director of Cartesian. I still have the note I drafted called “TK’s Initial Proposals”, dated 5 February 2003. It was for an RA Forum (not Group) and had the following objectives:

1. To allow revenue assurance professionals within European telecoms operators to develop and promulgate best practice in their discipline, in order to:

2. To encourage the development and validation of training courses that spread the understanding of revenue assurance practices through the industry.

So it did have a European remit right from the start, and I think we largely succeeded in meeting the first objective though not the second training one; Cartesian ended up defining that on its own. There was also an aim to become an industry voice, speaking for fellow RA professionals at conferences etc but that didn’t happen much as far as I remember – apart from meetings with Ofcom when the regulator consulted on changes to the Metering and Billing Directive. Conferences were largely billing-oriented in those days, and dominated by software suppliers, and we just thought we could do something more focussed on RA and cheaper.

Eric: In July 2014 we celebrated the 10th anniversary of RAG, along with a special birthday cake (pictured).  But we may have been celebrating the wrong date!  We thought the first meeting had been held in early 2004 but it seems there may have been an even earlier RAG meeting in 2003.  Can you clear up this mystery for us?

Tony: I am pretty sure the first meeting was on 3 December 2003, but we really focussed then on the principles and general direction. Key was to put Cartesian into a secretarial role and have industry figures (not software suppliers) in the steering role. I do have the original contact spreadsheet from 4 November 2004 by which time it was a slick operation with the names of all our clients and targets and the Cartesian account person designated to invite them. We spoke to 38 people from 23 companies, and it looks like 9 accepted the invitation.

Eric: What were the topics that dominated the agenda during the first few years of RAG?

Tony: I think Billing Assurance and in particular compliance with Ofcom requirements was the big one. How to justify investment in RA worried people as success would theoretically lead to redundancy.

Eric: I remember some very good work being done by contributors to RAG, such as a terminology guide which you oversaw, and a paper about interconnect assurance that Alan Strong pulled together long before it was fashionable to cover wholesale costs and revenues alongside retail-oriented assurance.  Which of RAG’s accomplishments stand out in your mind?

Tony: Of course interconnect was pretty much the first area of consultancy that Cartesian worked on after mediation. Alan and I implemented the very first software solution and it was natural to link that experience to RA which we were also big in (Alan was after all a Chartered Accountant and I was CIMA). We were also early in the recognition of content assurance especially for mobiles.

Eric: With the benefit of hindsight, is there anything you would have done differently?

Tony: Not that I can think of.

Eric: For many years RAG stood for the Revenue Assurance Group, but we changed the name to the Risk & Assurance Group because the boundaries between neighbouring disciplines had become increasingly vague. We also wanted to signal that we welcomed the input of a wider range of experts who wouldn’t normally think of themselves as doing revenue assurance work. Would you agree with the broadening of RAG’s scope?

Tony: It makes perfect sense the way you have gone. We tried to broaden into utilities but got little traction. We also were very keen on embracing fraud but those guys liked to keep a focussed forum going rather than join in with ourselves.

Eric: Does it give you some satisfaction to think you developed a model for how practitioners can interact – minimal sales pressure, a relaxed atmosphere where people are willing to tell jokes and share secrets – which has now been copied widely?

Tony: Without a doubt.

Eric: You were an expert consultant for many years.  I’m sure you’re happy to be retired, but if you could be tempted to return to tackle one last great challenge, what would it be?

Tony: I must say I am deeply concerned at the way staff members’ intelligence and experience have been subordinated to computer algorithms, meaning that customer service decisions are often taken out of their hands. How much revenue is lost? I also wonder how involved risk experts are in the major projects that are undertaken – both software implementations and system amalgamations after mergers.

Eric: After many years of service, is there any chance we might draw you back to another RAG event, for one last hurrah?

Tony: Is this an invitation to a jolly? Yes please!